My father’s first stroke was quite minor and only affected his movement slightly, and he recovered to normal not long after that. His second stroke badly affected his left side, which he had to move with great difficulty and he hardly went out. His third stroke was a lot worse, as he couldn’t even feel his body from neck downwards and needed to use a gastrostomy feeding tube instead of eating normally. At the same time, doctors said he would be bedbounded forever because a large portion of his brain was damaged. They said there was nothing they can do to improve his life.

I am a believer of miracles and decided to make a change for him. We managed to help him recover 50% within 6 months through a series of mental and physical training (exercising with visualization), which later helped him to recover a lot. He is now able to sit well on a wheelchair and move with one arm. The feeding tube was also removed, and he can eat by himself. Even the doctors felt it was a miracle (Should you be interested to know more details about how he regained his independence, please feel free to contact us for details. We will be glad to share our personal experiences and knowledge with you.).

At first we pushed him with a manual wheelchair, but after a while I felt that by passively waiting for us to push his chair and doing almost nothing most of the day, it will not help him at all. I knew he needs a lightweight and compact power chair for daily use, so he can move around easily. After my father started to use the Foldawheel, I can see that he became more active and proud to go out. We also get him to use our standing wheelchair to improve health condition, and now he can grab something to stand up by himself. I have to emphasize that every effort and investment we made was worth it.

Diana, she loves to travel with her PW-999UL. Owning a lightest foldable power chair make herself more easy and independent in traveling around the world. It’s 4 years old chair and serves her well. 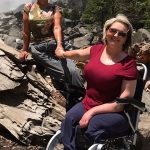 The package arrived very quickly from Malaysia. It’s very easy to put together, and the wheelchair is very light. The Foldawheel folds in few seconds and can be easily put in the regular vehicle’s trunk. We even were able to pack it in a suitcase when we were flying on a cruise vacation!

I bought this chair over a week ago on August 2018, the speed of delivery was amazing it arrived in Jersey 5 days left Malaysia on Friday arrived here on Wednesday ( there a weekend and a bank holiday included ). We went all over town for the first time in over 3 years.

Thank you for the excellent customer service, technical support, and shipping the right parts to get my Foldawheel PW-1000XL back up and running! I did not realize how much I missed my chair until I was without it for 10 days. I am so thankful that I wanted to send you a few photos of me smiling and the collapsed chair on our recent flight.

The Foldawheel itself surpasses my wildest expectations, it is a delight to maneuver with the joystick control and climbs the very steep, badly rutted grass approach to my bowling club with remarkable ease. This now means I can take up lawn bowls again with my specially made bowling arm

I love my wheelchair thank you. It’s perfect. It’s very comfortable, and easy to operate.It arrived so quickly, especially considering it was coming from Malaysia, it took around 4 days and they provided detailed tracking throughout.

close
close
Start typing to see products you are looking for.
Scroll To Top